Saturday, 28 November 2020_Iran’s President Hassan Rouhani has warned of a plot hatched by Israel to incite chaos in the region, vowing that Tehran will at the proper time respond to the assassination of its prominent nuclear scientist. 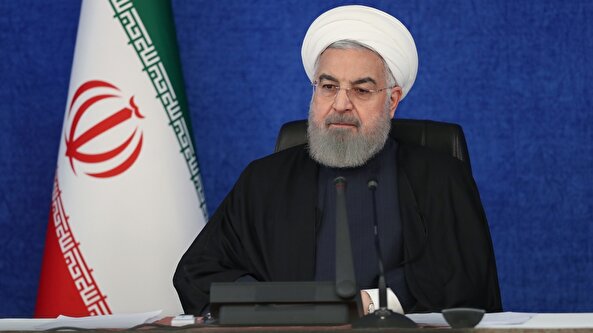 “Our people are wiser than to fall in the trap of the Zionists’ conspiracy. They are thinking of creating chaos and unrest, but they should know that we have already read their hands and that they will not succeed in achieving their evil objectives,” Rouhani told a cabinet meeting on Saturday.

The remarks came a day after Mohsen Fakhrizadeh, a professor of physics at Imam Hussein University who headed the Iranian Defense Ministry's Organization of Defensive Innovation and Research (SPND), was assassinated while travelling near Absard city in Tehran Province's eastern Damavand county in an attack that also involved a car bombing.

The president stressed that “the Iranian nation and the officials of the country are more courageous and zealous than to leave this criminal act unanswered, and that the relevant officials will respond to the crime in due time.”

“Both the Zionist regime and those who are against Iran should know that the country’s path of development and research will continue rapidly, and that with the loss of our beloved Fakhrizadeh, many Fakhrizadehs will strive to make up for his absence,” he added.

Earlier in the day, Rouhani issued a message, expressing sympathy with Fakhrizadeh’s family and offering condolences to the scientific community as well as the revolutionary people of Iran over the martyrdom of the prominent scientist.

“Once again, the wicked hands of the global arrogance, with the usurper Zionist regime as the mercenary, were stained with the blood of a son of this country, causing deep grief among the nation over the loss of a hard-working scientist,” the message read.

“Undoubtedly, this terrorist and desperate incident emanates from the weakness and inability of the sworn enemies of the Iranian people amid the scientific capabilities and honors of the great nation and their successive defeats in the region and other political arenas.”

Share to
Related News
Rouhani: Enemies are angry with the tranquility and improvement of our economy
Iranian Parliament called for the revival of Iran's nuclear industry
Tags
scientist ، Rouhani ، assassination
Your Comment