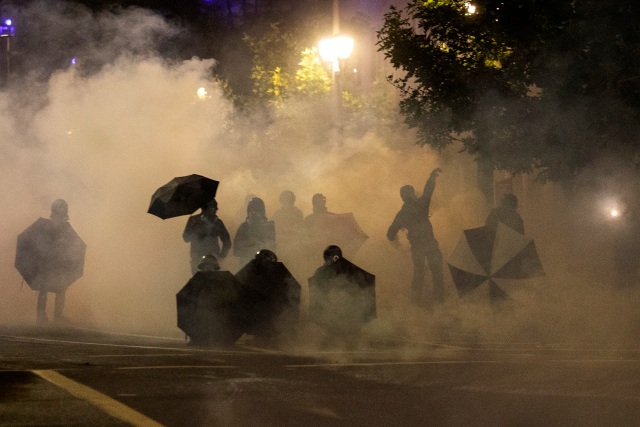 The June 26 order by U.S. District Court Chief Judge Marco Hernandez restricted use of tear gas and other crowd control devices to scenarios in which public or police safety is at risk. It barred any such tactics against protesters using passive resistance, according to Oregon Public Broadcasting (OPB).

Hernandez found multiple violations of the order during a protest outside the Portland Police Administration’s (PPA) headquarter son June 30. During the demonstration, more than 200 protesters gathered in the city’s Peninsula Park before a contingent moved onto the PPA building.

“Individuals in crowds of otherwise peaceful protestors and activists have lit fires and launched bottles, cans, rocks, and fireworks from great distances at police officers,” he wrote in the new ruling, according to OPB. “Officers have responded with significant force in wielding batons against protestors and deploying scores of less-lethal munitions, including [tear gas]. Both sides have caused significant injuries.”

Not all uses of tear gas violated the order, including cases in whicch demonstrators kicked canisters back at officers, Hernandez wrote. However, he identified direct violations in three cases, including Officer Brent Taylor firing 15 rounds of non-lethal ammunition during an altercation over a banner some demonstrators were carrying, according to the news outlet.

“[N]one of the circumstances cited by Officer Taylor suggested that this banner was a weapon or would be imminently used by protestors as a weapon,” he wrote. “Police officers had ample opportunity to observe the banner before Officer Taylor deployed his munitions.”

“We appreciate the court’s findings that PPB’s [Portland Police Bureau’s] excessive force against those protesting in support of Black lives and against police brutality is unlawful and unacceptable,” Ashlee Albies, one of the lawyers representing the plaintiffs, told OPB.