Saturday, 12 December 2020 _Iran has executed Rouhollah Zam, administrator of a notorious counterrevolutionary website, who had been convicted of corruption on earth. 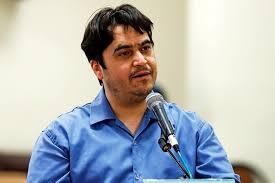 The public relations office of Tehran's general and revolutionary court announced that Zam, the founder and director of Amad News, was hanged on Saturday morning, IRNA news agency reported.

Zam, 47, was handed down the death sentence back in June after he was found guilty of 13 counts of charges as instances of corruption on earth.

He was convicted of committing offences against the country’s internal and external security, spreading lies, abetting economic disruption, spying for the intelligence services of France and one of the regional states, cooperating with the hostile US government against the Islamic Republic, participating in propaganda activities against the Islamic establishment on behalf of counterrevolutionary groups, fueling violence during the 2017 protests, insulting the sanctities of Islam and acquiring illegitimate wealth.

He also committed criminal and corrupt acts again the security and livelihood of the Iranian people through the Amad News Telegram channel and his contacts with elements affiliated to foreign spy agencies.