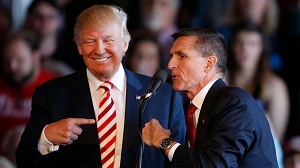 Donald Trump’s short-lived former national security adviser Michael Flynn has suggested the outgoing US president should use military force to “rerun” the election in the key swing states he lost in November.

Speaking to Newsmax, a right-wing broadcaster Mr Trump has promoted as an alternative to Fox News since last month’s vote, General Flynn pushed a conspiracy theory popular among Republican voters suggesting that voting machines were hacked to flip ballots in favour of Democrat Joe Biden, now president-elect after winning both the Electoral College and popular vote by comfortable margins.

“There is no way in the world we are going to be able to move forward as a nation,” General Flynn said. “[The president] could immediately, on his order, seize every single one of these machines.”

“Within the swing states,” he continued, “if he wanted to, he could take military capabilities, and he could place those in states and basically rerun an election in each of those states.

“I mean, it's not unprecedented. These people are out there talking about martial law like it's something that we've never done. Martial law has been instituted 64 times.”

General Flynn proposed the same idea on Twitter on 1 December on behalf of a collective calling itself the We The People Convention, only for it to be labelled “preposterous” by Bill Banks, a national security law expert at Syracuse University.