Brexit talks go on around the clock to avoid extension

Thursday, 24 December 2020_The EU's chief negotiator, Michel Barnier, says he will not close the door on the United Kingdom and that he remains ready to negotiate beyond January 1. 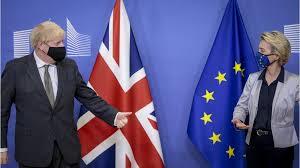 Both sides are giving trade deal talks a "final push" in the hope of reaching an agreement before the UK leaves the bloc’s single market on 31 December and has to start trading on World Trade Organization terms.

SNP leader Nicola Sturgeon and London mayor Sadiq Khan want the UK to follow EU trading rules beyond that deadline to allow more time for an agreement. But the prime minister the UK will "cope with any difficulties" encountered.

The UK wants sovereign control over its fishing waters that up until now were shared with Europe, which will mean Britain taking the lion’s share of the catch. On the other hand, the EU wants to retain significant access to UK waters for boats from France, Spain, and other countries with large fleets. But some say this is the UK trying to have it's cake and eat it.

Meanwhile stranded truck drivers and travelers have clashed with police at the UK's Dover port. France banned travel from the UK on Sunday after news of a new variant of Covid-19 spreading across south east England. A deal was reached Wednesday between the two countries to resume travel if people test negative for the virus, but drivers are frustrated saying there are no toilets, food, or adequate testing capabilities.