Thursday, 14 January 2021 (YJC)_ From Friday travelers from South America and Portugal will be banned from arriving in the UK. 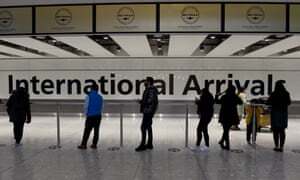 Travellers from South America and Portugal will be banned from arriving in the UK from Friday morning as a precautionary measure aimed at preventing the new Brazilian Covid variant from reaching the country, the government has announced.

The transport secretary, Grant Shapps, said arrivals from more than a dozen countries including Argentina, Venezuela, Bolivia and Peru would be halted. He said Portugal had been included because of its close travel links with Brazil.

UK residents will be exempt from the new rules – but they and their families will have to self-isolate for 10 days on arrival.

The decision was made at a meeting of the ministerial Covid-O committee on Thursday morning, on the basis of evidence from experts on the New and Emerging Respiratory Virus Threats Advisory Group (Nervtag) on new viruses.