Sunday, 17 January 2021 (YJC)_ Woman, who said she was Officer, arrested at Inauguration Checkpoint by US police. 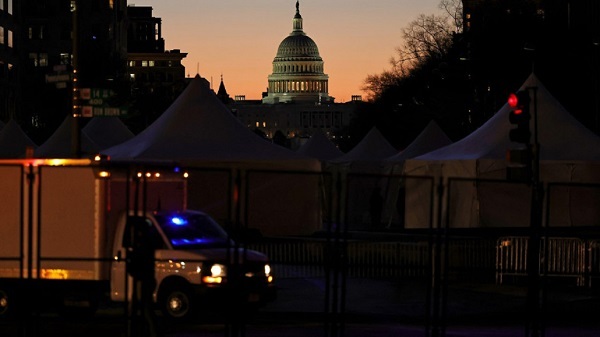 A woman was arrested at an inauguration checkpoint Saturday morning for impersonating a law enforcement officer and fleeing from police, officials say.

Linda Magovern, 63, was arrested near Union Station after she said she was an officer and “a part of the presidential cabinet,” and presented a military police challenge coin, a D.C. police report says.

Magovern approached the inauguration perimeter at Columbus Circle and First Street NE in a vehicle at about 8:45 a.m., police say.

She was “displaying a round metallic object later identified as a Military Police Challenge Coin,” the police report says. The medallions are used by law enforcement and members of the military to recognize achievement.

Police say Magovern then said she was an officer and presidential cabinet member.

An officer ordered Magovern to put the vehicle in park and turn it off. She complied but drove forward after an officer asked for her license.

Officers repeatedly ordered Magovern to stop the vehicle, but she headed north on Columbus Circle, police said. She was stopped nearby, outside Union Station.

Security is high in D.C. ahead of Inauguration Day on Wednesday, with more than 15,000 current National Guard members in D.C. as of Sunday morning, NBC News reports.

Share to
Related News
WH to Issue Order Stopping ‘Midnight Regulations’ from Trump Admin on Inauguration Day
After the White House, Trump faces uncertain future and legal threats
Barr to step down as attorney general
Biden chief of staff: All Americans 'need to step up right now' on pandemic
Trump’s adviser: He deserves to be reelected
Tags
US ، capitol hill ، washington ، police ، Joe biden
Your Comment