Saturday, 23 January 2021(YJC)_ The U.S. Embassy in Riyadh issued a warning to Americans after a blast heard in Riyadh. 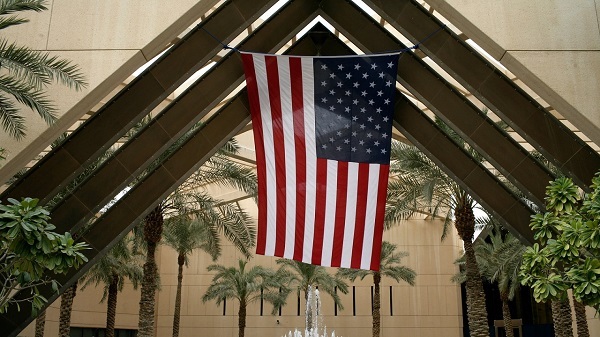 Saudi Arabia intercepted an apparent missile or drone attack over Riyadh on Saturday, said state media in the kingdom, which has come under repeated attacks from Yemen’s Houthi rebels since 2015.

Social media users posted videos of what appeared to be an explosion in the air over Riyadh. The incident came at about 11am.

heard a loud sound and thought that something had fallen from the sky,” said one resident, who lives in the Al-Sulaimaniyah district of Riyadh. “The whole house was shaking.”

The Saudi Arabia-led coalition, which backs Yemen’s internationally recognised government against the Houthis, said it “intercepted and destroyed a hostile air target going towards Riyadh”, without elaborating, according to state-run Al Ekhbariya television station.

The Houthis did not immediately acknowledge launching a missile or a drone towards Riyadh on Saturday.

Riyadh’s King Khaled International Airport said there were a number of flight delays, but it was not immediately clear if they were linked to Saturday’s incident.

The US embassy in Riyadh issued a warning to Americans calling on them to “stay alert in case of additional future attacks”.

According to the new US secretary of state, Antony Blinken, the Biden administration will quickly revisit the designation of Yemen’s Houthi rebels as “terrorists”.