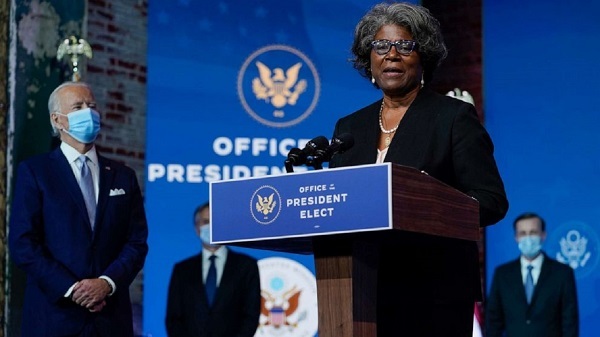 President Joe Biden's nominee for the post of US ambassador to the UN, Linda Thomas-Greenfield, revealed during her confirmation hearing in the Senate that the Department of State that the New' US Foreign Policies is to Pressure Iran.

The Democrat's nominee for the prominent diplomatic post also revealed that the Department of State is planning to increase pressure on Iran after the Biden administration suggested that it would be striking a new nuclear deal with the country According to Thomas-Greenfield, the US plans to apply this pressure with help not only from allies, but also from China and Russia, who have previously refused to join the "maximum pressure" campaign against the Islamic Republic that was initiated by President Donald Trump in 2018 after he abandoned the Iran nuclear deal.

"As the ambassador to the United Nations, if I'm confirmed, I will work to ensure that we get the support of our allies, but to see where we can find common ground with the Russians and the Chinese to put more pressure on the Iranians to push them back into strict compliance", Thomas-Greenfield said.

Share to
Related News
Biden will reenter Iran nuclear deal unconditionally: Italian international relations expert
Enemy wants Iranians to submit to US will: Top general
US Presidents Use Iran as ‘Campaign Cudgel’ to Get Elected: Spokesman
Trump claims Iran will sign new nuclear deal with US within one month after his reelection
Tags
US ، Iran ، JCPOA
Your Comment