The assassination of Russia’s ambassador to Turkey on Monday may have been plotted by elements in Israel or by ISIS (ISIL, IS, Daesh) sympathizers to damage the improving ties between Moscow and Ankara and disrupt the peace process in Syria, a political analyst in California says. 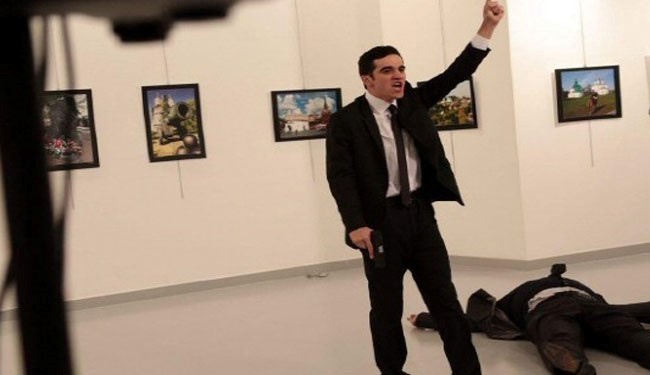 The murder may have also been ordered by Turkish President Recep Tayyip Erdogan to falsely blame the attack on US-based Turkish opposition cleric Fethullah Gulen and push for his extradition, said Scott Bennett, a former US Army psychological warfare officer.

"This is a typical move by third-party elements such as the Israeli Mossad and [Prime Minister Benjamin] Netanyahu or genuine ISIS sympathizers to trigger an alienation between Russia and Turkey,” Bennett told Press TV on Wednesday.

The Russian ambassador to Turkey, Andrei Karlov, was fatally shot on Monday by an off-duty policeman while attending an event at an art gallery in Ankara.

The assailant, identified as 22-year-old Mevlut Mert Altintas, was later killed in a shootout with police.

After carrying out the murder, which was caught on camera, the assailant went on a rant, blaming Russia for the death of civilians in the Syrian city of Aleppo.

The assassination was condemned by the Turkish and Russian leaders as an attempt to derail bilateral ties. It came as the countries are maintaining cooperation over the Syrian crisis, Press TV reported.

Moscow and Ankara support the opposing sides of the conflict in Syria and the two have military presence in the Arab country.

On Tuesday, Turkey blamed Gulen for the assassination and tried to place blame on the United States for allowing the cleric to live in the country.

However, US Secretary of State John Kerry denied American involvement in the assassination, voicing concern about Ankara’s rhetoric against Washington.

Kerry has raised concerns about "some of the rhetoric coming out of Turkey with respect to American involvement or support, tacit or otherwise, for this unspeakable assassination yesterday because of the presence of Mr. Gulen here in the United States," US State Department spokesperson John Kirby told reporters on Tuesday.
Alalam - Russia
Share to
Related News
John Kerry condemns Israel, hails ‘extraordinary’ restraint of Palestinians
Weinstein hired ex-Mossad agents to silence accusers
Tags
Israel ، assassination ، Daesh ، Turkey
Your Comment