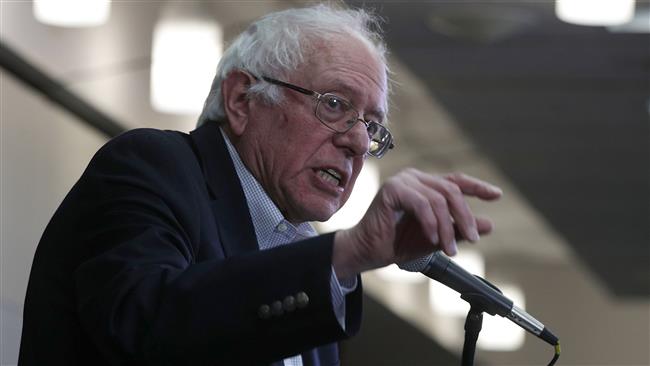 Sanders took to Twitter late Friday to respond to Trump’s recent statement that the US should "greatly expand and strengthen its nuclear capability.”
"Congress can't allow the Tweeter in Chief to start a nuclear arms race," Sanders tweeted. "It's a miracle a nuclear weapon hasn't been used in war since 1945."
The senator further wrote that former presidents, both Republican and Democratic, have realized that "our goal must be to reduce the number of nuclear weapons, not expand them.”
On Friday, Trump was asked by MSNBC reporter to clarify an earlier tweet regarding the expansion of America’s nuclear arsenal. In response Trump said, "Let it be an arms race. We will outmatch them at every pass and outlast them all."
Trump’s remarks were an apparent response to comments by Russian President Vladimir Putin, who on Thursday called for reinforcing military nuclear potential in response to NATO’s planned build-up near his country’s borders.
Putin said that Russia's military was "stronger than any potential aggressor."
Speaking at a news conference the next day, the Russian president said his earlier comments have been misunderstood in the United States and that he did not regard Washington as a potential aggressor.
"Of course the US has more missiles, submarines and aircraft carriers, but what we say is that we are stronger than any aggressor, and this is the case,” he added.
Putin also said that there is nothing new or remarkable in Trump’s statement, because he had been talking about "the necessity of strengthening the US nuclear arsenal,” during the course of his election campaign.
The Russian president said Moscow would never be the one to unleash an arms race. "We will never spend resources on an arms race that we can't afford."
Trump’s comments have been concerning for non-proliferation experts, who warned that a boost to America's nuclear arsenal could fuel tensions around the world. The US along with Russia, Britain, France and China, are the five nuclear weapons countries who are allowed to keep a nuclear arsenal under the Nuclear Non-Proliferation Treaty (NPT).
India, Pakistan, and Israel have also nuclear weapons but they have never signed the treaty. In addition, North Korea is reportedly having a couple of atomic bombs. It had withdrawn from the treaty in 2003.
(press TV)
Share to
Related News
Sanders' measures indicate possible 2020 run: Report
Pakistani student stabbed to death by teenage boys in Australia
Trump Mexico wall will destroy lives, Berlin mayor warns
Tags
Sanders ، Congress ، Trump ، arms race
Your Comment