Haddad Adel: I would not run for elections were I as old as Hashemi

Tehran, YJC. Gholamali Haddad Adel has said that he does not approve of Hashemi’s candidacy for upcoming elections.

Haddad Adel, Tehran Representative in the Majlis and member of the tripartite coalition said in answer to a question as what he 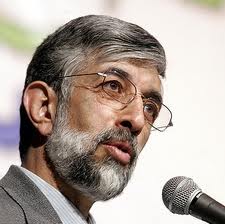 would have to say to Hashemi regarding his candidature for the elections "Recommendations must be made when the other side is ready to hear and accept them. If I were as old as Mr. Hashemi I would not become candidate.”

Haddad Adel added "Of course in the next two months the Development Coalition will plan a poll which could be used to make us agree on one person.”

In answer to a question regarding the time of the poll he said "This depends on when our decision to choose one person is made final. At that time we will announce the polling time. The polls will be a decisive factor for us to reach unity. There might be other issues at work as well and our procedures will not boil down to the polls.”

"A number of factors effect who will be chosen. One of them is the polls. Also abilities, accomplishments, and expertise will are counted. We still have time to round things up. We will try to turn the coalition in unity and efficacy into a typical example in the society’s political ethics.”

Share to
Related News
Hashemi’s candidacy can be the last mistake in his political career
Zibakalam: Reformists must make consensus on Hashemi
Tags
Iran election Hashemi, Haddad Adel
Your Comment