Two major US political parties are controlled by the same people: Analyst

The two major political parties in the United States are controlled by the same people and corporate money, according to an American politician and political analyst. 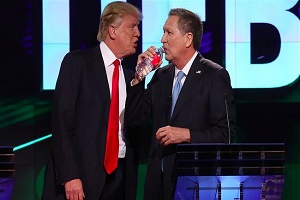 Art Olivier, a US vice presidential candidate in the 2000 election, made the remarks in an interview with Press TV on Monday when asked to comment on Ohio Governor John Kasich’s statement in which he said both Republican and Democratic Parties are "disintegrating” because they are not offering anything to people.
"I believe the political parties are disintegrating before our very eyes. I think more and more people across this country see no purpose for political parties,” Kasich said on Sunday.
"There are more and more independents because of the squabbling,” the former GOP presidential candidate said. "What's at risk here to Democrats is you can't turn your back on these people. And to Republicans, you need to invite Democrats in because we're talking about lives.”
Olivier said the "Republican and Democratic Parties are ultimately controlled by the same people in the United States.”
"Look at the Democratic National Committee’s meetings they have and the Republican National Committee’s meetings, they are the funded by the same people, the exact same dollar amount, the exact same companies that fund two political parties,” he stated.
"And they have an organization that controls the election process, and they have three Republicans and three Democrats to sit on that committee,” he said, adding that so these people only allow Republicans and Democrats on these debates.
"So when you have these two parties that are controlled by the same people, people start figuring out ‘wait a minute’ this whole system is rigged, and the voter turnout just becomes lower and lower,” he explained.
The Republican and Democratic Parties are able to take turns electing US presidents and controlling Congress because American system discourages people from supporting third parties, such as the Greens and Libertarians.
Third party candidates face major challenges in the United States, such as the failure to meet the criteria for ballot access. Due to debate access rules, they are even often excluded from participating in presidential debates.
According to political observers, the two major US political parties are heavily influenced by corporate money and the financial markets and lack the power to implement meaningful reforms in the country.
Share to
Related News
Trump gives CIA new authority on US drone strikes
NY attorney rejected Trump’s call before being fired: US official
Peru, Mexico criticize US proposal to separate migrant families at border
More US states challenge Trump’s travel ban
Tags
political ، US ، parties
Your Comment