TEHRAN, March 29, YJC - Iran and Russia issue a joint statement, outlining a roadmap for the future status of their bilateral relations and cooperation on the regional and international stage. 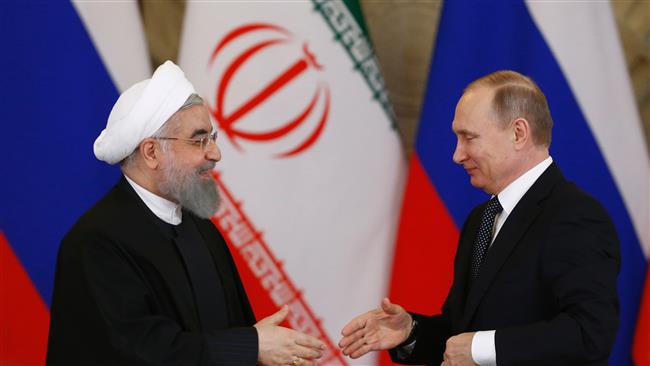 TEHRAN, Young Journalists Club (YJC)The 16-page statement was released during talks between President Hassan Rouhani and his Russian counterpart, Vladmiri Putin, in the Kremlin on Tuesday, the second day of a two-day visit to Moscow by the Iranian chief executive.Dubbed "Moving forward to Comprehensive Strategic Cooperation,” the statement listed the areas of priority, where the two sides seek long-term collaboration.
Prospect of Tehran-Moscow ties
According to the statement, the countries signed momeranda of understanding (MoUs) concerning such areas as nuclear energy, oil exploration and production, electricity, rail transport and urban development:
The Atomic Energy Organization of Iran and Russia’s Rosatom State Nuclear Energy Corporation, signed an MoU in the area of nuclear material shipment.
The National Iranian Oil Company and the Russian State Geological Company signed another such document enabling further cooperation.
The two country's energy ministries inked an MoU in the area of electricity trade.
A memorandum of strategic cooperation was signed between the Iranian and Russian railways organizations.
An MoU was inked addressing housing development and public services between Iran’s Roads and Urban Development Ministry and the Ministry of Construction, Housing and Utilities of the Russian Federation.
The Russian side, meanwhile, announced the completion of domestic formalities required to enable Russian assistance to Iran in building a thermal power station, the statement added.
The Iranian and Russian statesmen also commended the agreement signed by Tehran and Moscow which enables visa-free travel for tourist groups traveling between the two countries.
They also ordered relevant authorities to work to ease the visa regime for all Iranian and Russian nationals willing to visit the two countries.
Cooperation on regional, global issues
Rouhani and Putin reaffirmed Iran and Russia’s "decisive support” for the Syrian government, army, and popular forces in their fight against terror groups, especially the Takfiri outfits of Daesh and Jabhat Fateh al-Sham, formerly known as al-Nusra Front, as well as their affiliates.
Iran and Russia have been lending military advisory support to the Syrian Army over its six-year battle against terrorism. Moscow has also been backing up government advances with its airpower since September 2015.
The two states also highlighted the continuation of their cooperation with Turkey on mediating intra-Syrian talks, saying the process would positively contribute to the UN-backed negotiations, which were running in tandem in Geneva.
Rouhani and Putin likewise denounced unauthorized foreign meddling in the Arab country’s affairs in the name of confronting terrorism, calling for international efforts towards the realization of a political solution to the Syrian crisis.
The Russian side also reasserted its "unswerving” support for Iran’s inclination to become a full member of the Shanghai Cooperation Organization.
Iran is currently an observer state in the body, which gathers Russia, China, and a number of Central Asian nations.
The chief executives also voiced concern regarding the ongoing Saudi-led war on Yemen, calling for an immediate cessation of bloodletting and the Riyadh-imposed crippling blockade of the already-impoverished nation.
They emphasized the need for concerted international efforts against terrorism through the prevention of violent extremism, hailing the UN General Assembly's endorsement of President Rouhani's proposal 'World against Violence and Extremism' (WAVE) in 2013.
The statesmen urged the rigorous implementation of the Joint Comprehensive Plan of Action, the nuclear deal signed between Iran and six world powers in 2015, saying this would help the International Atomic Energy Organization verify the "solely peaceful” nature of Iran’s nuclear activities.
The two sides also laid emphasis on Iran’s complete entitlement to exercise its legitimate right to peaceful nuclear energy in accordance with the Nuclear Non-Proliferation Treaty (NPT).
In the same context, they voiced support for the realization of a nuclear weapons-free Middle East amid continued refusal to sign the NPT by Israel, the widely-reported sole possessor of nuclear arms in the region.
And finally, they condemned certain countries' adoption of unilateral sanctions to push their political ambitions.