TEHRAN, April 16, YJC - Tens of thousands of people marched through midtown Manhattan and dozens of U.S. cities on Saturday to demand that President Donald Trump release his tax returns. 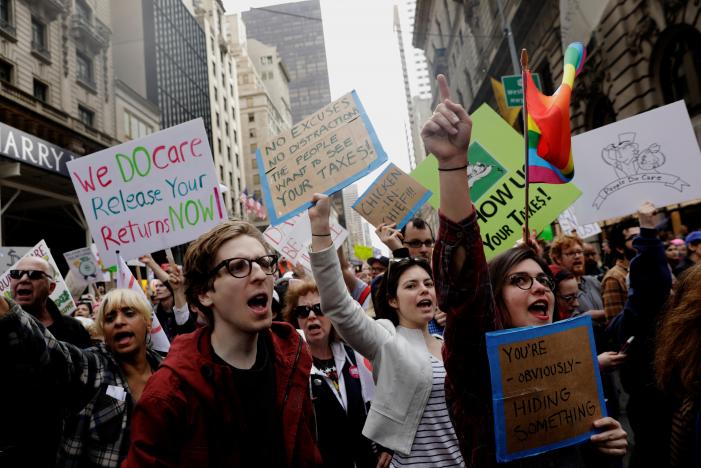 TEHRAN, Young Journalists Club (YJC) - Tens of thousands of people marched through midtown Manhattan and dozens of U.S. cities on Saturday to demand that President Donald Trump release his tax returns and to dispute his claim that the public does not care about the issue.
Organizers of "Tax March" in more than 150 cities across the country and beyond wanted to call attention to Trump's refusal to disclose his tax history, as his White House predecessors have done for more than 40 years.
The marches coincide with the traditional April 15 deadline for U.S. federal tax returns, though the filing date was pushed backed two days this year.
There were no reports of violence or arrests, in contrast to a clash between Trump supporters and opponents that erupted at a rally in Berkeley, California, where nine people were arrested.
Two of the biggest tax marches took place in New York and Los Angeles, with each drawing about 5,000 people, according to estimates by Reuters reporters. No official estimates were immediately available.
In Manhattan, a good-natured crowd rallied at Bryant Park before marching up Sixth Avenue to Central Park.
Among the marchers was an oversized inflatable rooster, sporting an angry expression and a sweeping metallic orange hairdo meant to resemble Trump's signature style.
"Thanks to Trump, I think that releasing your taxes when you run for president now has to be a law,” said New Yorker Marni Halasa, 51, who arrived in a tutu and leggings made of fake dollar bills and holding a sign that read "Show Me The Money!”
In Washington, more than 1,500 protesters gathered on the front lawn of the U.S. Capitol, where members of Congress addressed the crowd before it marched to the Lincoln Memorial.
"We are taking the gloves off to say knock off the secrecy Mr. President," said Senator Ron Wyden of Oregon, the ranking Democrat on the Senate Finance Committee, which would play a leading role in tax reform measures being considered in Congress.
He described Trump's refusal to release his taxes as being "like a teenager trying to hide a lousy report card."
TAX REFORM
Among the marchers was Melinda Colwell, 34, a stay-at-home-mother from Ledyard, Connecticut. She said she was concerned that conflicts of interest in Trump's tax returns might foreshadow selfish interests in his tax reform policies.
"I think it's important to know how that could influence his decisions and how he could benefit from the decisions being made," she said.
As a candidate and as president, Trump has refused to release his tax returns, citing an ongoing audit by the Internal Revenue Service. The IRS has said that Trump can release his tax returns even while under audit.
The White House could not be reached immediately for comment on the marches.
Events were also planned in cities in Europe, Japan and New Zealand.
The marches were launched by a single tweet, organizers said. A day after the massive Jan. 21 women's march in Washington and other cities, comedy writer Frank Lesser tapped out on Twitter, "Trump claims no one cares about his taxes. The next mass protest should be on Tax Day to prove him wrong." It has been retweeted more than 21,000 times.
In Los Angeles, television director Mike Stutz turned up at the march dressed in costume as a Russian general and said he was called General Bullshitski. He carried a sign that read: "What Tax Returns? Putin paid cash. Trust your oligarchs," referring to allegations of contacts between Trump's campaign and Russia, led by President Vladimir Putin.
Joe Dinkin, spokesman for the Working Families Party, one of the groups organizing the marches, said investigations into the Trump campaign's alleged connections to Russia underscore the need to disclose his returns.
"Without seeing his taxes, we'll never really know who he's working for," said Dinkin, who expects the marches to draw at least 100,000 protesters.
There have been some glimpses into Trump's tax history. Last month, MSNBC host Rachel Maddow reported on two pages of Trump's 2005 return that were obtained by investigative reporter David Cay Johnston and released by DCReport.org. They showed Trump paid $38 million in taxes on more than $150 million in income.
And in October, The New York Times reported that Trump had declared a $916 million loss on his 1995 federal tax return, citing three pages of documents from the return.
Source: Reuters
Share to
Related News
Fire in El Salvador’s Finance Ministry building kills 1
US dollar falls on rising concerns over Trump
Protesters in New York City greet Trump on first homecoming visit
With Trump pick aboard, top U.S. court tackles religious rights
US VP Pence arrives in South Korea amid tensions over North
Trump supporters, opponents clash in California park
White House: Trump paid $38 million in income tax in 2005
U.S.-Mexico crisis deepens as Trump aide floats border tax idea
Tags
american protests ، trump tax returns ، donald trump ، president of united states ، federal tax ، california ، manhattan
Your Comment