TEHRAN, April 16, YJC - The clash between supporters and opponents of Donald Trump resulted in at least 20 arrests. 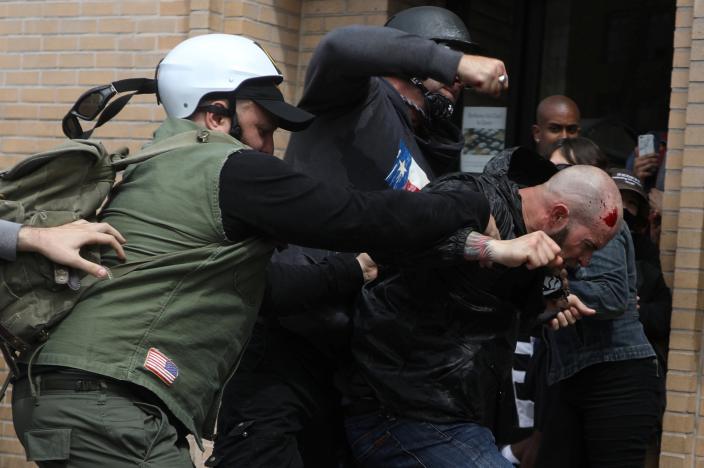 TEHRAN, Young Journalists Club (YJC) - A melee erupted on Saturday in a Berkeley, California park where supporters and opponents of President Donald Trump were holding competing rallies, resulting in at least 20 arrests as police struggled to keep the two camps apart.
As fist fights broke out between the two sides and people threw bottles and cans over a barricade separating them, police resorted to using to an explosive device at one point in a bid to restore order.
Several people were observed by a Reuters reporter with bloodied faces and minor injuries, but there was no official word on casualties from authorities. Media, citing police, reported that at least 11 people were injured.
Police said more arrests could follow after video shot during the melee was reviewed.
The trouble unfolded when hundreds of Trump opponents staged a counter-rally alongside an event billed as a "Patriots Day" free-speech rally and picnic, organized by mostly Trump supporters.
Between 500 and 1,000 people were in the park as the rallies peaked, according to an estimate by a Reuters reporter.
Among the Trump opponents were some counter-protesters dressed in black and wearing masks. The other side included self-described "patriots" and "nationalists", Trump supporters, free speech advocates, and other groups.
Daryl Tempesta, 52, who said he served in the U.S. Air Force near the end of the Cold War, went to the rally to show his support for Trump.
"As a veteran, I like the track America is on, and that Trump is willing to stand and say we are still America and we are not going to be globalist, we're not going to be a communist country," Tempesta said. "That's a message I can get behind."
A weekly farmers market was canceled ahead of the rally due to concerns about violence. Even so, a stall selling fresh vegetables was open for business amid the fist fighting, explosions from firecrackers and smoke wafting through the air.
"We decided to show up anyway because this is our livelihood," said Tim Mueller, a farmer who owns the stall, surrounded by protesters on both sides.
At least 100 people from both camps eventually moved out of the park and into one of the city's main intersections, where they continued to fist fight, hurl insults and chant at each other.
The police presence was light there, and only two or three officers were seen near the crossroads.
Berkeley has a long history of liberal activism and the University of California, Berkeley, was a center of protests in the 1960s.
Source: Reuters
Share to
Related News
With Trump pick aboard, top U.S. court tackles religious rights
US VP Pence arrives in South Korea amid tensions over North
Thousands at rallies demand Trump release tax returns
Tags
berkeley ، california ، donald trump ، rally ، rallies
Your Comment