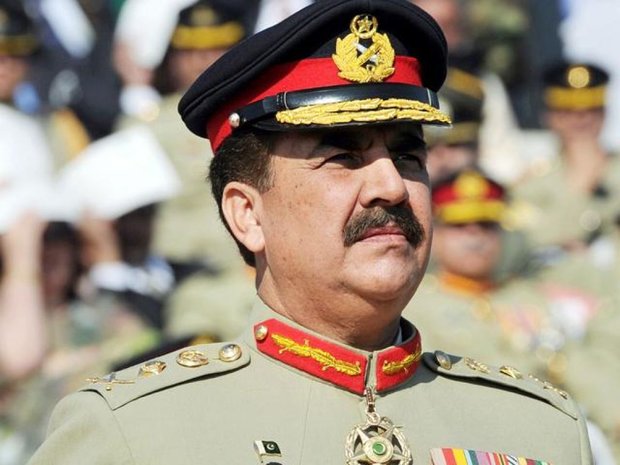 TEHRAN, Young Journalists Club (YJC)- Pakistan’s Defense Minister has recently confirmed that the country’s former Army Chief has been appointed as commander of so-called Saudi-led military coalition.
The move, however, has enthused controversy in Pakistan with many questioning General Raheel Sharif’s motivation to become part of the Saudi initiative whose objectives are still mysterious.This appointment has sparked controversy in Pakistan.
According to Pakistani media report, the Islamabad government has issued a no-objection certificate (NOC) for Sharif to assume the command of the controversial alliance after an understanding was reached between Pakistan and Saudi Arabia on the matter.
Several Pakistani opposition parties, including the Pakistan People’s Party (PPP) and Pakistan Tehreek-e-Insaf (PTI), are also doubtful of Sharif’s role in the alliance.
PTI Chairman Imran Khan has tasked parliamentarians of his party with taking the issue to the parliament.
Opposition lawmakers consider the decision a violation of a parliamentary resolution passed in April 2015 that called on Pakistan to maintain a policy of neutrality, particularly in the Saudi aggression against Yemen.
The Saudi campaign, which allegedly seeks to restore Yemen's ex-government to power, has killed over 12,000 Yemenis, according to the latest tallies.
Meanwhile, Qaumi Watan Party Chairman Aftab Ahmad Khan Sherpao has questioned why Pakistan had agreed to become a member of the Saudi-led coalition without first finding out the aims and objectives of the alliance.
A recent editorial published in Dawn newspaper has questioned the clandestine nature of the move.
"The secrecy surrounding the move raises many questions about our policymaking process. The argument that the government could not refuse the Saudi request makes us appear more like a client state,” the paper said.
Source: Mehr
Share to
Related News
Pakistan's Shiites mourn 61 killed in mosque bombing
Iran, Saudi Arabia fit for solving Shiite-Sunni conflict
Iranian filmmaker blasts Islamo-phobic schemes in address to UN
3 Shiite Muslims shot dead in Pakistan
Tags
pakistan ، defense minister ، raheel sharif ، ppp ، noc
Your Comment