TEHRAN, April 26, YJC - Iran and Russia have once again decried a recent US missile attack against a Syrian army airbase, stressing that such acts block the formation of a united front against terrorism. 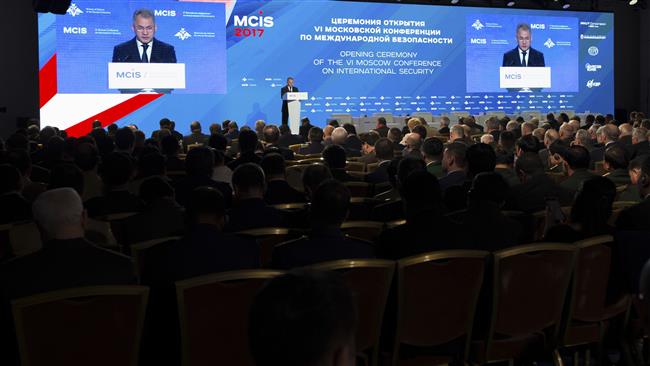 TEHRAN, Young Journalists Club (YJC) - Iranian Defense Minister Brigadier General Hossein Dehqan and Russia’s Foreign Minister Sergei Lavrov both commented on the attack during their speeches made at the Conference on International Security, which opened in Moscow on Wednesday.
The US attack in early April saw a barrage of 59 Tomahawk missiles launched against the Shayrat Airfield in the western Syrian province of Homs, causing some 15 fatalities, including civilians.
Washington staged the offensive under the pretext of responding to an earlier purported gas attack against a northwestern Syrian village. The attack, which the US blames on Damascus, was carried out without a UN approval or a fact-finding probe.
Dehqan said the missile raid was against all international regulations.
He further highlighted Washington’s unconstructive role in the Middle East, saying the US is trying to stage a new form of "international fascism” by implementing a new doctrine and by "commercializing security.”
Pointing out to factors contributing to the current local and international imbalance and violence, Dehqan cited American President Donald Trump’s volatility in word, attitude and decision-making as well as the US, Israel, Britain, and Saudi Arabia supporting and reinforcing Takfiri terrorist groups against regional governments.
He also warned that neither the US nor any other country can attain its "political and expansionist” goals by backing war and terrorism.
Unless terrorism is vanquished in Syria and Iraq -- which hold the largest concentrations of Takfiris -- the terrorists would soon be targeting all their backers, including the US, Europe, Saudi Arabia, and Turkey "with the most violent acts,” he further cautioned.
Highlighting that the global security woes had emanated from the US efforts to impose "a unilateral order,” Dehqan said the only way out of the situation was to bring about a multipolar international establishment, which negated both imperialism and any type of regional or global hegemony.
"Iran will continue to cooperate with powerful Russia against terrorist movements until the end. The Islamic Republic is of the belief that the front formed in Syria by Russia, Iran and the Arab country’s legitimate government and its resistant people will eventually conquer the terrorists,” he said.
The Russian senior diplomat also blasted the US attack on Syria, saying Washington’s violence against the Arab country undermines the chances of creating a broad anti-terror coalition, while constituting "a flagrant violation of international law and an act of aggression against a sovereign state.”
The Russian foreign minister also called for a professional and transparent investigation into the Idlib chemical incident.
"Provocations like those that occurred in Khan Shaykhoun on April 4 require a professional investigation under the auspices of the OPCW, on a geographically balanced basis, and such an investigation should be open and transparent," Lavrov said.
Meanwhile, Russian Defense Minister Sergei Shoigu told the Moscow conference that the US missile strike was a gross violation of international law.
"In addition, Washington’s actions have created a threat to the lives of our soldiers, who are in Syria fighting terrorism,” Shoigu said.