Huge opposition rally due in Venezuela

TEHRAN, May 3, YJC -Venezuela’s opposition supporters are set to stage a massive rally in the capital, Caracas, on Wednesday to protest President Nicolas Maduro’s bid to write a new constitution. 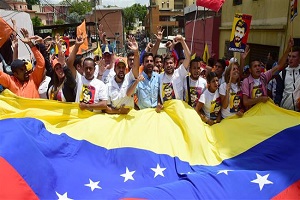 TEHRAN, Young Journalists Club (YJC) - Maduro’s proposal, announced on Monday, has enraged the opposition, prompting them to call for ever larger protest rallies to demand elections in an attempt to oust the socialist president.
Opposition leaders have described the demonstration planned for Wednesday as a "mega protest.”
"The [government’s] idea is not to consult with the people, but rather for the ruling party itself to choose so as to have a tailor-made constitution,” said the deputy speaker of the country’s opposition-controlled National Assembly, Freddy Guevara, on Tuesday. "We have to up the pressure in the streets.”
The opposition has rejected Maduro’s plan to rewrite the constitution as a bid to avert holding a new election and hold on to power. It has been organizing a steady wave of protest rallies across the country against the government for more than a month.
A number of people have been killed in incidents of violence related to the protests as well as lootings prompted by the economic crisis in Venezuela in recent weeks. The death toll from that unrest reached 29 on Tuesday as the government announced that a young man caught looting was shot by a shopkeeper in the northern city of Valencia.
Large protests were also held across Venezuela against the Maduro government on Tuesday. Garbage cans were used to block the streets in those protests.
Maduro says a new constitution is essential to fend off what he refers to as an attempted foreign-sponsored "coup” against his government. He has vowed to defend the socialist "revolution” launched by the late president Hugo Chavez, who oversaw the writing of the current constitution and passed away in 2013.
In the recent weeks of unrest, reports of attacks by pro-opposition and government-backed agitators have generated fear among citizens.
Source:Press TV
Share to
Related News
Maduro rebukes Pence for meddling in Venezuela's internal affairs
200,000 protesters march against Venezuela’s Maduro
Death toll from Venezuela unrest hits 42 as violence continues
3 more people killed in Venezuela unrest
3 more people killed in Venezuela unrest
Tags
venezuela ، supporters ، massive
Your Comment