TEHRAN, May 17, YJC -At least four people have died of gunshot wounds at separate protests in Venezuela, bringing the fatality toll from the recent unrest in the country to 42. 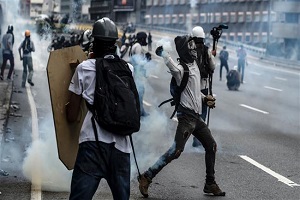 TEHRAN, Young Journalists Club (YJC) - Prosecutors announced on Tuesday that four men, ranging in age from 17 to 33, had been killed over 24 hours of unrest.
An unnamed 17-year-old boy was shot in the head during a rally in the central state of Barinas on Monday and succumbed to his wounds on Tuesday morning.
"A group of people arrived [at the site of protests] and started shooting, injuring the young person in the brain,” the state prosecutor’s office said of the youngest victim. It was not clear who the assailants were.
Meanwhile, the chief prosecutor is charging a police officer in the death of another man, named Diego Hernandez, 33, whose final moments were purportedly captured in a video circulating on social media.
According to a local rights group, at least 90 people were also arrested during Monday protests.
Unrest in Venezuela has been ongoing over the economic and political decisions of President Nicolas Maduro. His latest decision to have a new constitution written has intensified protests.
Opposition supporters hold sit-ins and set up roadblocks in anger at Maduro, whom they accuse of attempting to strengthen his hold on power.
The latest wave of unrest initially erupted in early April, when the government-allied Supreme Court stripped the opposition-controlled parliament of its powers. Although the decision was later revoked, protests continued and even strengthened.
Source:Press TV
Share to
Related News
Maduro rebukes Pence for meddling in Venezuela's internal affairs
Fresh protests rock Venezuela after man set on fire
Six killed in separate shootings in Chicago
Systematic medical failure kills several immigrants in US detention centers: HRW
Huge opposition rally due in Venezuela
Tags
death ، violence ، continues
Your Comment