Trump not to relocate US embassy in Israel visit: Official

TEHRAN, May 18, YJC -US President Donald Trump does not plan to announce relocation of the American embassy to Jerusalem-al-Quds in the upcoming visit, says a senior administration official. 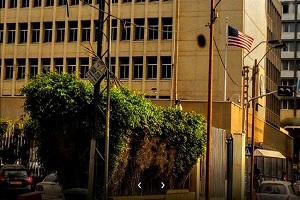 TEHRAN, Young Journalists Club (YJC) -The unnamed official’s comments on Wednesday violated a campaign pledge by the president to recognize Jerusalem al-Quds as "the eternal capital of the Jewish people,” according to multiple reports.
"We don’t think it would be wise to do it at this time,” the official said. "We’ve been very clear what our position is and what we would like to see done, but we’re not looking to provoke anyone when everyone’s playing really nice.”
Since his campaign pledge at the American Israeli Political Action Committee (AIPAC), Trump has been pressured to make the move.
The official ruled out expectations that such a measure is on the president’s agenda in his first ever foreign tour, which will start by a visit to Saudi capital Riyadh on Friday.
Trump, who often brags about being a great deal maker, has also vowed to establish peace between Israelis and Palestinians.
"You know I'm not a person who breaks promises." Trump told a conservative Israeli news outlet in January.
At a joint press conference with Israeli Prime Minister Benjamin Netanyahu in February, Trump said the issue of embassy relocation was being considered "with great care.”
Since Trump’s inauguration in January, Tel Aviv has increasingly become emboldened in its expansionist plans for Jerusalem al-Quds.
Israel lays claim to the entirety of Jerusalem al-Quds as its capital while Palestinians want its eastern part as the capital of their future state.
During its long history, the holy city has been destroyed at least twice, besieged 23 times, attacked 52 times, and captured and recaptured 44 times.
Share to
Related News
Kaspersky Lab in crosshairs since exposing US & Israeli spies behind Stuxnet’ – fmr MI5 agent
Congressman Al Green threatened with lynching by Trump supporters
US jets bomb pro-government Syria forces advancing on militant base
US Justice Department names Ex-FBI head to lead Trump probe after Comey
Trump approval rating hits new low : Poll
US dollar falls on rising concerns over Trump
Tags
trump ، israel ، official
Your Comment