TEHRAN, August 1, YJC - US Vice President Mike Pence has blasted Russia’s involvement in Georgia and says President Donald Trump will sign a bill on a new package of sanctions against Russia. 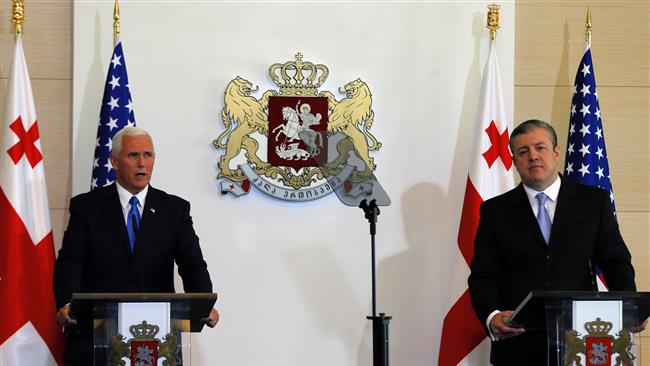 TEHRAN, Young Journalists Club (YJC) - "President Trump will sign the sanctions bill soon," Pence said at a press conference on Tuesday during a visit to Tiblisis, the Georgian capital, located south of the Russian border.

The White House has said Trump will now approve the bill, which would create limits for Trump to lift sanctions on Moscow.

Congress has passed a new sanctions package against Russia, Iran and North Korea.

The new sanctions aim to penalize Moscow for allegedly meddling in last year's US presidential election and Russia's reunification with Crimea in 2014.

In retaliation, Russia has ordered 755 US diplomatic staffers to leave the country by September 1.

During the news conference in Tiblisis, Pence blasted Russia for its "occupation" of Georgian territory, reffering to South Ossetia and Abkhazia, which broke away from Georgia in the early 1990s after the collapse of the Soviet Union.

Moscow, however, recognized South Ossetia and Abkhazia as two independent nations after a brief war broke out between Russia and Georgia in August 2008.

While in the country, Pence is set to review joint military drills that are being billed as the largest ever held between the US and Georgia.

Russia is opposed to NATO's eastward expansion and describes similar war games near its borders as provocative steps, Presstv reported.

Pence is currently on a tour of Eastern Europe aimed at reassuring US allies concerned about Russia. Georgia was Pence’s second stop.

The visit comes a day after Pence met with the presidents of the three Baltic nations of Latvia, Lithuania and Estonia in the Estonian capital of Tallinn. Pence pledged that an attack on any of the three NATO member states “is an attack on us all."