TEHRAN, August 9, YJC - India is making good on its promise to cut crude oil imports from Iran amid the two countries' spat over the development of a gas field in the Persian Gulf. 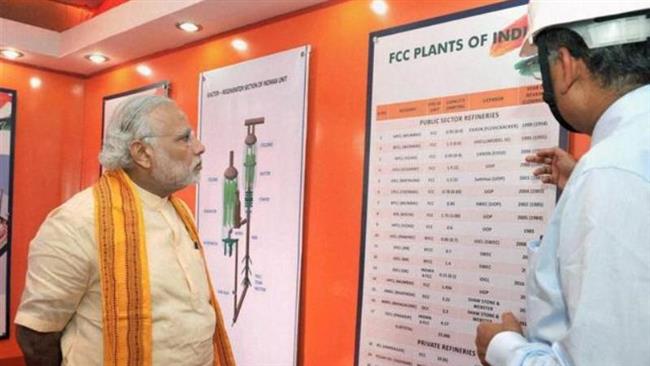 TEHRAN, Young Journalists Club (YJC) - According to new data released on Wednesday, India’s purchases of Iranian crude fell 16.3 percent in July from a month ago to 414,900 barrels per day (bpd).

Imports were down 20.7 percent from a year ago, yet the highest drop since February 2016 might be on the way this month when India’s loadings of Iranian crude are expected to hit 310,000 bpd, Reuters reported.

The cuts are in keeping with Indian refiners’ plans to order about a quarter less Iranian crude in the fiscal year to March 31, 2018.

India has been replacing less Iranian barrels with those from Iraq, raising purchases from the Arab country by 31.5 percent in July from a month ago.

India lifted 954,400 barrels per day (bpd) of Iraqi oil in the month compared with 725,800 bpd in June. That made Iraq the top oil supplier of India for the fourth straight month.

The spike in Iraqi imports came amid a slump in Venezuelan crude shipments, which fell 31.1 percent from June to 337,100 bpd in July, the report said.

India’s decision to cut Iranian imports came after Tehran refused to submit to New Delhi’s demand for exceptional concessions on the development of Iran’s giant Farzad B gas field.

The Indians were stripped of the right to develop the field in 2014 for dragging their feet after Bijan Zangeneh was named Iran’s minister of petroleum.

For the new cabinet, President Hassan Rouhani on Tuesday proposed the reappointment of Zageneh as the oil minister who is known for his no-nonsense approach.

In May this year, Zangeneh stressed that Iran was not worried about the Indian cuts as he oversaw the signing of a basic agreement with Russia’s Gazprom for the development of Farzad B.

“India is one of our good customers and we are willing to boost cooperation. If there is a cut in our exports to India, we will have no troubles as there are many other customers,” he said.

Some observers fear that India's tactic might have implications for its further dealings with Iran. New Delhi has long been eyeing Iran's port of Chabahar for development as part of its ambitious bid to access Central Asia and Afghanistan.

India’s Road Transport and Shipping Minister Nitin Gadkari, however, expressed confidence on Tuesday that the venture was safe.

Last week, Gadkari represented India at the oath taking ceremony of President Rouhani for the second term in Tehran where he discussed Chabahar as well as the gas field standoff with Iranian officials.

"Chabahar will not only boost ties between Iran and India but we will be closer to Afghanistan and then Russia, we can export goods till Russia. This will be a direct route," he told Press Trust of India (PTI) on Tuesday.

Gadkari said he was confident that Chabahar would be ready for operations by 2018 and that India was considering sending wheat to Afghanistan via the strategically-located port.

“Once Chabahar is operationalized, which we are hopeful to be in 12 to 18 months time, it will prove to be a gateway to golden opportunities to boost trade and business," he said.