TEHRAN, November 19 -Hundreds of activists flocked to the Libyan Embassy in Paris on Saturday, outraged with the government’s failure to tackle people smuggling after a CCN report unveiled a network of migrant slave auctions in Libya. 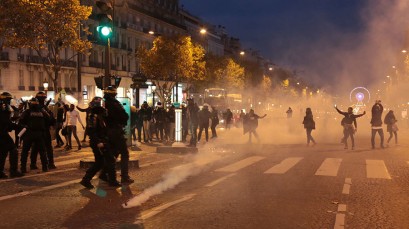 TEHRAN, Young Journalists Club (YJC) -Hundreds of activists flocked to the Libyan Embassy in Paris on Saturday, outraged with the government’s failure to tackle people smuggling after a CCN report unveiled a network of migrant slave auctions in Libya.

About a thousand people turned up to the protest following calls by several prominent anti-slavery groups and a number of celebrities of African origin, including soccer star Didier Drogba and former Miss France Sonia Rolland.

Carrying signs reading “No to slavery in Libya,” the demonstrators gathered in front of the Libyan Embassy on Saturday afternoon before marching towards the Champs-Elysees, where they were stopped by riot police cordons.

Free our brothers,” “Let’s liberate Africa,” “We are black, we are human!” the demonstrators chanted.

Clashes broke out as police moved to disperse the protest. Some activists began hurling rocks at police, who responded with tear gas.

A Ruptly crew was on the spot to film as activists attempted to break through metal barriers erected by police.

One person was arrested following the scuffles, AFP reports. Police say the protest was illegitimate, adding that “no damage” resulted from the clashes.

Earlier this week, the Libyan government launched a probe into slave auctions operating in the country, including areas controlled by the UN-backed internationally-recognized Government of National Accord, after CNN showed footage of migrants being sold at a location outside Tripoli.

CNN claims in the report that men were priced at as little as $400, and that auctions are being carried out at many sites across Libya each month.

Libya has become the last stop on the route to Europe for migrants fleeing war, persecution, and poverty in their home countries, with the ongoing political chaos allowing people smugglers to thrive in the country, ravaged by civil war.