TEHRAN, November 29 - North Korea has fired a ballistic missile, which splashed down in the Sea of Japan, according to the South Korean, Japanese and US militaries. The Pentagon says an initial assessment indicates it was an intercontinental ballistic missile (ICBM). 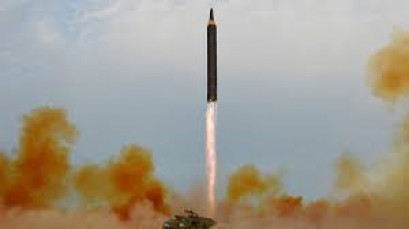 TEHRAN, Young Journalists Club (YJC) -North Korea has fired a ballistic missile, which splashed down in the Sea of Japan, according to the South Korean, Japanese and US militaries. The Pentagon says an initial assessment indicates it was an intercontinental ballistic missile (ICBM).

South Korea's Joint Chiefs of Staff were the first to report on the launch. "North Korea launched an unidentified ballistic missile eastward from the vicinity of Pyongsong, South Pyongan Province, at dawn today," it said, as cited by Yonhap news agency. Seoul and Washington were analyzing the missile’s trajectory, it added.

The Pentagon later said it had detected and tracked a North Korean missile launch.

Pentagon spokesman Colonel Robert Manning described the projectile as an intercontinental ballistic missile, adding that it traveled some 1,000 km before splashing down into the Sea of Japan.

The White House said that US President Donald Trump had already been briefed on Pyongyang’s new launch when the missile was still in the air.

Trump eventually called the North Korean missile launch “a situation that we will handle.” The launch would not change the US approach to the North Korea issue, he added.

The Japanese prime minister's office said that the North Korean missile apparently landed in waters off Japan within the country’s exclusive economic zone.

The South Korean military said that the missile flew some 960 kilometers, reaching a peak altitude of 4,500 kilometers. The figures have yet to be verified by other sources, since such an altitude would mean the projectile travelled well into space, with the Low Earth Orbit being marked at 2,000 kilometers.

US Defense Secretary James Mattis said that the missile went higher than any other projectile the North Koreans had launched previously. The North Korean launch, if confirmed, would be the first test conducted by Pyongyang since September, when the Pyongyang fired a ballistic missile over Japan.

The EU condemned the new launch as “unacceptable violation of the DPRK's international obligations.”

“The European Union's message is unequivocal: the DPRK must abandon its nuclear, weapons of mass destruction and ballistic missile programs in a complete, verifiable and irreversible manner, immediately cease all related activities and return to the Nuclear Non-Proliferation Treaty and the IAEA Safeguards,” an EU spokesperson said in a statement.

The latest launch came a week after the US relisted North Korea as a “state sponsor of terrorism.” US President Trump asserted that Pyongyang “has supported international acts of terrorism, including assassinations on foreign soil.” The move was strongly condemned by Pyongyang, which said Washington used the designation as instrument “of destroying independent countries.”