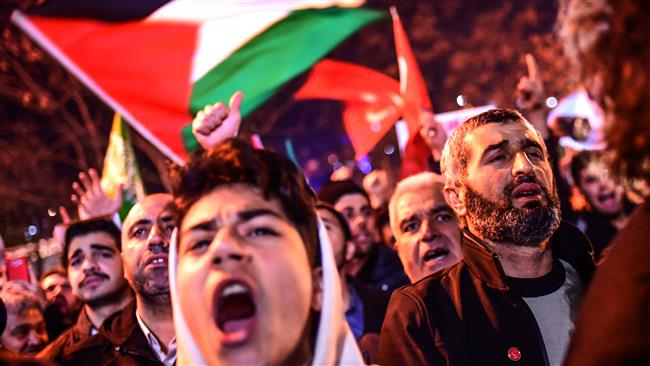 “The Islamic Republic of Iran has always stressed that the most important reason behind instability and insecurity in the Middle East is [Israel’s] continued occupation, the US’ relentless support for the Zionist regime, and denying the oppressed Palestinian nation the right to establish an independent state with al-Quds as it capital,” the statement said.

Describing the US move as “provocative and unwise,” the Iranian Foreign Ministry warned that “recognizing al-Quds as the Israeli regime’s capital” will “provoke Muslims and inflame a new Intifada and intensify extremism and violent behavior for which the US and the Israeli regime will be responsible.”

The statement also called on the international community to pressure the US not to go through with the embassy move or the recognition of Jerusalem al-Quds as the Israeli regime's capital.

The statement was issued shortly after Trump officially declared the disputed city of Jerusalem al-Quds as Israel's capital, despite warnings from around the world that the measure risks triggering a fresh wave of violence in the Middle East.

In a speech at the White House earlier in the day, Trump said his administration would also begin a years-long process of moving the American embassy in Tel Aviv to the holy city.

In a televised speech after Trump's announcement, Palestinian President Mahmoud Abbas said Jerusalem al-Quds is the "eternal capital of the State of Palestine."

Abbas added that the US president's speech was "tantamount to the United States abdicating its role as a peace mediator."

"In addition, these measures are considered a reward to Israel for denying the accords and challenging the international law," the Palestinian president stated, adding that the US "encourages the occupation policy, settlements, apartheid and ethnic cleansing."

Meanwhile, Palestinians in the besieged Gaza Strip staged a demonstration against the US and Israel, condemning Trump's recognition of Jerusalem al-Quds as Israel's capital.

The Palestinian resistance movement of Hamas which rules Gaza condemned the US move as "flagrant aggression against the Palestinian people," and called on Arabs and Muslims to "undermine the US interests in the region" and to "shun Israel."

Hamas chief Ismail Haniyeh said in a statement that the Palestinian people "know how to respond properly to the disregard of their feelings and sanctuaries."

He added that the decision "will not change the facts of history and geography."

"We call upon the US administration to reconsider this faulty decision which may result in highly negative outcomes and to avoid uncalculated steps that will harm the multicultural identity and historical status of Jerusalem al-Quds," it said.

"You can't come out and say, 'I'm a great power, I can do what I want.' There can be no understanding under which one can say I made such an announcement and it will become reality," Cavusoglu stated, adding that "the whole world opposes” what he described as Washington’s “dangerous” move.

The office of Syrian President Bashar al-Assad dismissed Trump's move, saying in a statement it would not undermine the "Palestinian cause."

"The future of Jerusalem al-Quds is not set by a state or a president, but by its history, will, and the determination of those loyal to the Palestinian cause, which will stay alive in the conscience of the Arab homeland until the establishment of a Palestinian state with Jerusalem as its capital," it said.

The kingdom also considered "all unilateral moves that seek to create new facts on the ground as null and void", Momani added.

"From day one as secretary general of the United Nations, I have consistently spoken out against any unilateral measures that would jeopardize the prospect of peace for Israelis and Palestinians," Guterres said.

Trump’s decision drew a chorus of condemnation from many other countries, including its close allies France and Britain.

"This is a regrettable decision that France does not approve of, and which goes against international law and all the UN Security Council resolutions. The status of Jerusalem is a question of international security that concerns the entire international community, and I'll reaffirm that the status of Jerusalem must be determined by Israelis and Palestinians in the framework of negotiations under the auspices of the United Nations," said French President Emmanuel Macron.

UK Prime Minister Theresa May also said her country disagreed with the US decision before reaching a “final status agreement.”

"We believe it is unhelpful in terms of prospects for peace in the region," May’s spokesperson said.

Israel lays claim to the entirety of Jerusalem al-Quds as its “capital” while Palestinians want its eastern part as the capital of a future state for themselves.

Palestinian leaders have warned that the potential relocation would fuel strong reaction in the region and deliver a death blow to any prospect of resolving the Israeli-Palestinian conflict.