US not taking sides in dispute over Jerusalem al-Quds: Haley

TEHRAN, December 7 - Nikki Haley, the United States ambassador to the United Nations, has said that the US is not taking sides in the dispute over east Jerusalem al-Quds, after President Donald Trump has officially declared Jerusalem al-Quds as Israel's capital. 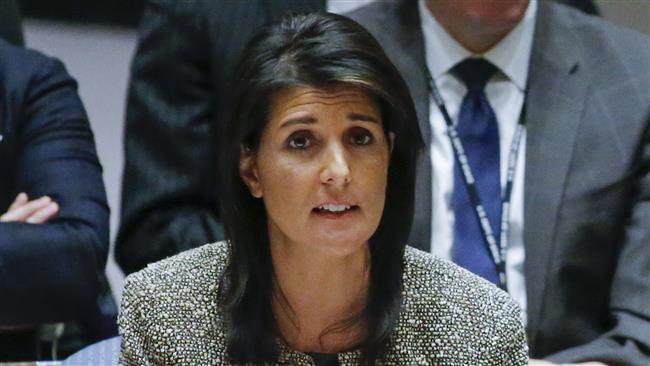 TEHRAN, Young Journalists Club (YJC) - In a speech at the White House on Wednesday, Trump said his administration would also begin a process of moving the American embassy in Tel Aviv to the holy city, which is expected to take years.

Haley said that Trump did not mention east Jerusalem al-Quds in his announcement and said it will be up to Israelis and Palestinians during peace talks to determine the fate of the disputed parts of the city.

“That’s for the two sides to decide,” Haley told CNN on Wednesday. “That’s not for the United States to decide.”

“We don’t want to pick a side on this,” she added.

East Jerusalem al-Quds was occupied in 1967 and Israel later annexed it despite international condemnations. The occupied city's final status is one of the thorniest issues in the stalemated talks between the Palestinian Authority and Tel Aviv.

Claiming all of al-Quds as its "eternal and indivisible" capital, Israel annexed the eastern part, where a number of sites sacred to Islam, Christianity, and Judaism, are located, following the 1967 Six-Day War.

The annexation is in violation of United Nations Security Council Resolution 242 and has never been recognized by the international community.

Trump in his Wednesday’s announcement said he would move the US embassy from Tel Aviv to Jerusalem al-Quds, but also signed a six-month waiver delaying the move.

‘Armed resistance is only effective road map for peace’

International lawyer and political analyst Barry Grossman told Press TV on Thursday that Trump’s announcement “has not actually done anything except recognize the rather absurd political status quo and the pundits are naively saying that since Trump did not use the expression ‘undivided Jerusalem’ in purporting to recognize Jerusalem as the capital of Israel, he has not actually done anything except give effect to the political status quo.”

However, he further observed that “of course, these same pundits also ignore all that the occupation has done for decades on the ground to make Jerusalem a de facto undivided city.”

“Meanwhile, we should all realize that his asinine position on Jerusalem is different from Russia's official position only in its timing,” he stated.

“In a sense, Haley is right in that the evil genius in Trump's latest pronouncement is that it is an entirely abstract gesture which does not actually change anything and therefore cannot be meaningfully challenged except perhaps in another round of absurd US Federal Court cases challenging government refusals to issue passports to individuals who claim to have been born in what they describe as Jerusalem, the capital of Israel,” the commentator said.

“Still, Trump could not be more wrong than he is about this sell-out to Zionists and the Necon lobby,” he added.

Grossman further opined that “it is naive to imagine that any of this is being done out of a desire for peace, bearing in mind that there will be no peace until there is justice.”

“As for peace,” the analyst said that “there already is an effective road map for genuine peace in Palestine and the wider Middle East, and that road map is called "armed resistance."