Haley: Women accusers should be heard, even if Trump is target

TEHRAN, December 11-Nikki Haley, the U.S. ambassador to the United Nations, said on Sunday that any woman who has felt violated or mistreated by a man has every right to speak up, even if she is accusing President Donald Trump. 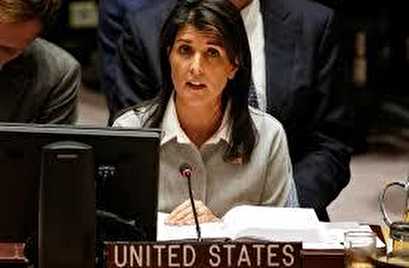 TEHRAN, Young Journalists Club (YJC) -Nikki Haley, the U.S. ambassador to the United Nations, said on Sunday that any woman who has felt violated or mistreated by a man has every right to speak up, even if she is accusing President Donald Trump.

Washington has been roiled by sexual misconduct scandals, with accusations leading to the resignations last week of three members of Congress.

Asked how people should assess the accusers of the president, Haley said, it was “the same thing.”

More than 10 women have accused Trump of sexual misconduct before he was president. While filming a segment of the television program “Access Hollywood,” he talked about kissing and groping women.

Trump has denied the misconduct allegations, although he apologized for his comments, which he called “locker room” talk.

White House spokeswoman Sarah Sanders said on Thursday that sexual harassment allegations against Trump were addressed by the American people when they voted him into office in November 2016.

Asked whether Trump’s election settled the matter, Haley said: “That’s for the people to decide. I know that he was elected, but women should always feel comfortable coming forward, and we should all be willing to listen to them.”

On Tuesday, voters in the heavily Republican state of Alabama will cast their ballots in a race involving Republican Roy Moore, a former state judge, and Democrat Doug Jones, a former U.S. attorney.

Moore has been accused of sexual misconduct toward women when they were teenagers and he was in his 30s. One woman said he tried to initiate sexual contact with her when she was 14.

Reuters has not independently verified the accusations, which Moore, a conservative Christian, has denied.

Many Republicans, including Alabama’s senior U.S. senator, Richard Shelby, have distanced themselves from Moore. But Trump has endorsed him, saying he wants to see the Senate seat stay in Republicans’ hands.

Share to
Related News
US will take N. Korea ‘into our own hands’ if China doesn’t do more – Haley
US not taking sides in dispute over Jerusalem al-Quds: Haley
US presses China to cut oil deliveries to N.Korea
Tags
Haley ، Trump is target ، Women
Your Comment