TEHRAN, February 10 -NATO member Turkey appears to be straining the patience of allies with its operation in Syria’s northwest – but just how far can the ties stretch before they snap? 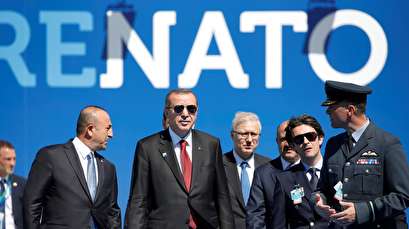 TEHRAN, Young Journalists Club (YJC) -NATO member Turkey appears to be straining the patience of allies with its operation in Syria’s northwest – but just how far can the ties stretch before they snap?

Turkey’s “anti-terrorist” operation in the Kurdish area of Afrin, northwest Syria, looks set to expand, with Manbij and Idlib being voiced as the next targets. As Turkish troops, along with their Free Syrian Army (FSA) allies, march into village after village to clear them of “Kurdish terrorists,” Ankara’s NATO allies don’t seem particularly thrilled about the intervention.

The president and foreign minister of France have warned Turkey against the invasion and accused it of “adding war to war”– albeit in interviews, not official statements.

Germany went a step further than words, and froze all decisions on supplying weapons to Ankara, including upgrades to the German Leopard tanks already employed by Turkey.

Kurdish fighters in Syria have enjoyed American support up until very recently, as they did some of the heavy lifting in the fight against Islamic State (IS, formerly ISIS) terrorists. However, late in 2017 US President Donald Trump promised to end arms supplied to the Kurds. In January 2018, US-led coalition spokesman Ryan Dillon made it clear that Afrin, in particular, is not an area of interest.

At the same time, Turkey is deemed to be acting in self-defense: US Defense Secretary James Mattis called it “the only NATO ally with an active insurgency inside its border,” threatened by the PKK (Kurdistan Workers’ Party), an armed group considered terrorists by NATO.

Now that Manbij is in Ankara’s crosshairs, however, things are getting more complicated between the two Allies. Some 2,000 American soldiers are stationed in Manbij, providing support for the YPG (People’s Protection Units) – another Kurdish paramilitary group, which Turkey has also designated terrorist.

Turkish President Recep Tayyip Erdogan has been clear about his intentions: he stopped just short of direct threats, warning the Americans to leave Manbij before the Turkish forces hit it. He mocked the American presence as “opportunistic” and accused Washington of having “calculations against Turkey, Iran and maybe Russia” in Syria. The Turkish deputy prime minister even said straight up that Americans could be targeted if they are found wearing uniforms of Kurdish militias.

With advancing Turkish forces just a 100km march away, Washington’s responses sound surprisingly meek. Without responding to Ankara’s jabs and accusations, top US brass have only made it clear they won’t budge from Manbij and won’t abandon their support for “Kurdish elements of the SDF [Syrian Democratic Forces],” an umbrella Syrian armed opposition group. Defense Secretary Mattis has only just announced plans to meet with his Turkish counterpart next week to talk this over.