TEHRAN, February 11 - Turkish jets on Sunday destroyed terror targets in northwestern Syria within the range of southern Turkish border districts of Hatay, according to Anadolu Agency correspondents on the ground. 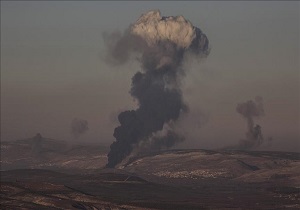 As Turkish Armed Forces continued to deploy military vehicles at the border close to the operation area, smoke was seen rising from various fields in Syria.

According to the Turkish General Staff, the operation aims to establish security and stability along Turkey’s borders and the region as well as to protect Syrians from terrorist oppression and cruelty.

The operation is being carried out under the framework of Turkey's rights based on international law, UN Security Council resolutions, its self-defense rights under the UN charter, and respect for Syria's territorial integrity, it said.

The military also said only terror targets are being destroyed and "utmost care" is being taken to avoid harming civilians.