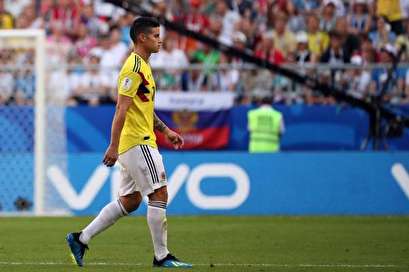 The Bayern Munich star was taken off the pitch in the 31st minute of Colombia's 1-0 win against Senegal in the Group H finale on Thursday in Samara, Russia. He was seen limping to the sideline before he went straight into the tunnel. Luis Muriel came on as a substitute.

"I am very worried," Pekerman told reporters. "The situation is tough for the team, it is not an easy situation."

Rodriguez, 26, did not start in Colombia's World Cup-opening loss to Japan on June 19. He instead came on in the 59th minute as a substitute. He has been hampered by a calf injury.

Pekerman said Rodriguez trained normally until Thursday. The coach also said he will wait to review medical results before determining if Rodriguez will be available for the round of 16. Pekerman did not confirm or deny if the injury was related to Rodriguez's calf.

Colombia faces England in the next knockout stage at 2 p.m. Tuesday at Spartak Stadium in Moscow.

"I don't have any confirmation of injury or any information at all," Pekerman said. "We must wait. We are hoping that it will be good news after the medical tests and then we will know for sure what has happened."