Kremlin accuses U.S. of trying to usurp power in Venezuela

TEHRAN, Jan 24 - Russia accused the United States of trying to usurp power in Venezuela and warned against U.S. military intervention there, putting it at odds with Washington and the EU which backed protests against one of Moscow's closest allies. 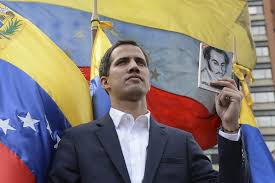 The prospect of Maduro being ousted is a geopolitical and economic headache for Moscow which, alongside China, has become a creditor of last resort for Caracas, lending it billions of dollars as its economy implodes. Moscow has also provided support for its military and oil industry.

Russia on Thursday accused Washington of stoking street protests and of trying to undermine Maduro, whom it called the country's legitimate president.

"We consider the attempt to usurp sovereign authority in Venezuela to contradict and violate the basis and principles of international law," Kremlin spokesman Dmitry Peskov said.

He said Russia had not received a Venezuelan request for military help and declined to say how it would respond if it did. Maduro, who met President Vladimir Putin in Moscow in December, was the legitimate president, said Peskov.

The Russian Foreign Ministry weighed in too, complaining that Washington was seeking to determine the fate of other nations by using a well-tried strategy of trying to depose an undesirable government.

It told Washington not to intervene militarily, warning outside interference was the path to bloodshed. "We warn against such adventurism which is fraught with catastrophic consequences," it said.

"My brother Maduro! Stand tall, we stand by you!" presidential spokesman Ibrahim Kalin, writing on Twitter, quoted Erdogan as saying.

China, a major lender to Caracas, also voiced its support for Maduro, saying it opposed outside interference in Venezuela and supported efforts to protect its independence and stability.