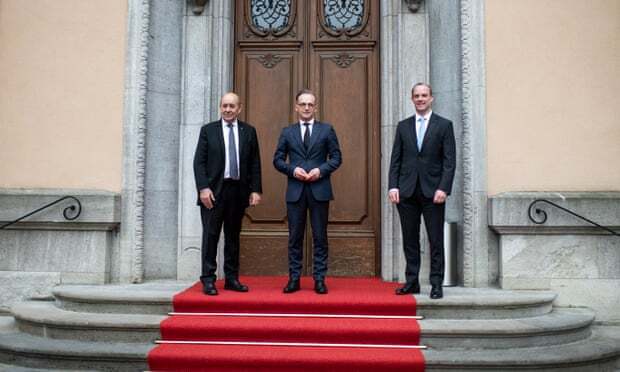 European foreign ministers from Germany, France and the UK have met to discuss a joint approach with the incoming Joe Biden administration on reviving the Iranian nuclear deal.

The three nations, whose ministers met in Berlin, are hoping Tehran can reach an agreement under which the US would lift its crippling sanctions in return for Iran ending its non-compliance with the 2015 agreement constraining its nuclear activities.

German officials added Europe would consider its response if Donald Trump in the dying days of his administration mounted a surprise attack on Iran’s nuclear sites.

Biden, the US president-elect, has said he wants the US to rejoin the Joint Comprehensive Plan of Action or JCPOA, the formal term for the Iran deal signed in 2015, if Iran ends its acknowledged breaches of the agreement, including the excess stockpiling of enriched uranium.

Germany, France and the UK, known as the E3, issued a strong joint condemnation last week of Iran’s latest breaches, including the use of more advanced centrifuges.

Gathering at a government villa outside Berlin, the foreign ministers Heiko Maas of Germany, Jean-Yves Le Drian of France and Dominic Raab of the UK met to discuss “what a further approach involving all signatories to the JCPOA, and perhaps also with a new US administration, could look like”, according to German officials.