Saturday, 28 November 2020_The Iranian Navy’s commander unveiled plans for the constant deployment of naval flotillas to the Indian Ocean by taking advantage of a new homegrown auxiliary ship. 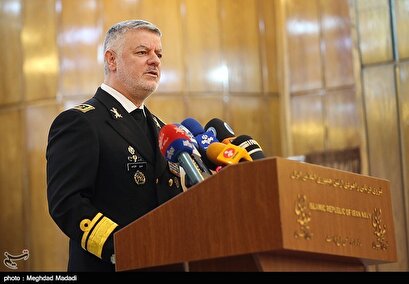 “Full stationing of the Navy in the Indian Ocean has been put on the agenda,” Rear Admiral Hossein Khanzadi said at a press conference on Saturday, held in commemoration of the Iranian Navy Day.

He noted that while Iran used the ports of the “friendly countries” for the deployment of units to the Indian Ocean waters, the outbreak of the coronavirus pandemic has prevented layovers at the ports of other states.

The commander said Iran is going to take advantage of an auxiliary ship to facilitate the dispatch of flotillas to the Indian Ocean.

The Iranian auxiliary vessel can carry up to seven helicopters and circumnavigate the globe eight to 10 times once fueled up, he added.

Furnished with VTOL drones, the military ship has been equipped with offense and defense equipment, Khanzadi said, adding that the unlimited presence of the auxiliary ship in the Indian Ocean could change the ocean’s security equations in favor of the regional countries.

The Iranian Navy is also going to unveil ‘Dena’ destroyer in early January 2021 and the ‘Zereh’ (shield) corvette this week, the commander added.