Colombia's government will begin formal peace talks with the country's second-biggest rebel group the ELN on Feb. 8, after the guerrillas release a politician being held hostage, President Juan Manuel Santos said on Wednesday. 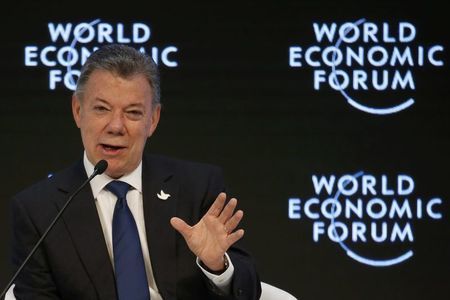 The National Liberation Army (ELN) will release politician Odin Sanchez before the start date, meeting a repeated government requirement for negotiations to begin, Santos told journalists in Davos, Switzerland, where he is attending the World Economic Forum.

"If he is not released, there will simply be no negotiation, That has always been the position of the Colombian government and my position," Santos said.

The government and ELN will reveal the timeline of talks from Ecuador later on Wednesday, Reuters reported.

The ELN is expected to release Sanchez to the International Committee of the Red Cross. Sanchez has been captive for more than eight months.

Sit-down negotiations had originally been expected to begin on Nov. 3.

Santos late last year concluded a peace accord with the larger Revolutionary Armed Forces of Colombia, or FARC, guerrilla group, after it was rejected in a shock plebiscite result in October.

The accord was voted down by a margin of just 0.4 percent.

Santos won the 2016 Nobel Peace Prize for his efforts to end the conflict with the FARC.

More than 220,000 people have been killed in Colombia's conflict, which has pitted leftist guerrillas against right-wing paramilitary groups and the security forces.