TEHRAN, May 9, YJC - Campaigning for the presidential election in Iran continues as the six presidential hopefuls travel across the country and make passionate stump speeches. 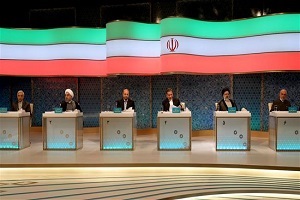 TEHRAN, Young Journalists Club (YJC) - In an address to thousands of his supporters in the Western city of Kermanshah on Monday, President Hassan Rouhani, who is rerunning for office, said certain people were worried by Iran’s progress and the youth’s freedom and that such worries were "the root cause of political disputes” in the country.
Those people "want Iran to remain in siege and want to cut the Iranian youths’ ties with the world, but Rouhani stood up against you,” he said.
The president also said that Iran’s defensive might had strengthened in the past four years more than it had in the eight-year period under his predecessor, stressing that the country would resist any intruders.
He further described the current period as the "days of destiny for the future of the country,” adding, "We should decide for the life of the poor; not in words, but in deeds.”
"On May 19, we will want justice, a true fight against corruption, equal civil rights for all Iranian ethnicities,” he said.
Earlier on Monday, Rouhani said in the city of Hamadan that he was making efforts to stop hard-liners.
Raeisi criticizes Rouhani’s economic policies
Speaking at an election campaign rally in the southwestern city of Ahvaz, Seyyed Ebrahim Raeisi, another candidate, criticized the economic management of the country by the Rouhani administration as "weak and unconstructive,” saying it had led to the shutting down of factories.
A former high-ranking judicial official, Raeisi also said that current problems could be solved as there were countless opportunities in the country.
"What we need is revolutionary and effective management to cope with problems,” he said.
Qalibaf urges action
Another candidate, Mohammad Baqer Qalibaf said in the western city of Khorramabad, "Today, the country needs actions rather than words.”
"Why is there an employment problem and why are there jobless youths despite the many resources and the existence of young and experienced manpower?” he said.
The mayor of Tehran vowed to, if elected president, begin work from the country’s underprivileged areas so that all people could feel the economic development.
Aqa-Mirsalim calls for respecting constitution
Mostafa Aqa-Mirsalim, another hopeful, said a president should "use all his... legal mandates within the framework of the constitution,” stressing that he welcomed "constructive criticism.”
The former culture minister also said that he would abide by the general rule of cooperating with the countries that are seeking collaboration with Iran, rather than those whose existence is based on oppression and occupation.
Hashemi-Taba focuses on domestic issues
Mostafa Hashemi-Taba, who is also running for presidency, said that among his priorities were aiding the poor and paying more attention to the field of agriculture.
The ex-vice president also said government expenses had to be managed according to law.
Jahangiri stresses employment
First Vice-President Es’haq Jahangiri, who is campaigning as Rouhani’s close associate, said on a TV program that the most important issue of the government was employment.
He underlined the need to recognize different political tastes, and emphasized that press freedom played a major role in preventing corruption.
Some 55 million people are eligible to vote for a new president on May 19.
The six candidates in the upcoming presidential election — Iran’s 12th since the Islamic Revolution in 1979 — have outlined their plans in two live TV debates so far, with the third televised program scheduled for later this week.
Source:Press TV
Share to
Related News
Campaigning underway on the streets of Tehran
Iran intel. minister warns candidates against unethical campaign methods
Iran’s election campaign heats up as presidential poll nears
Iran presidential hopeful Hashemi-Taba calls for changing Islamic banking law
Iranian presidential candidate says not to linger over JCPOA
Canada says aware of importance of holding Iranian presidential elections for expatriates
Enemies seek to destroy pillars of Islamic world
'Saudi Arabia has grown so miserable it conspires with Israel against Iran'
Iran, Norway stress collaboration to fend off terrorism threats
Tags
iran ، continue ، racing
Your Comment