Sunday, 22 November 2020 (YJC) _ There were no reports of casualties after the Israeli air force launched strikes in locations in the Gaza Strip. 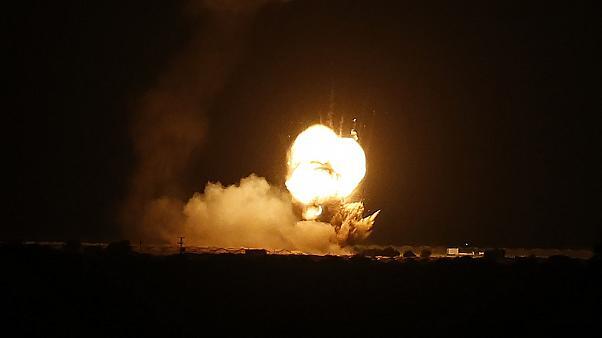 Israeli aircraft on Sunday struck multiple sites in the Gaza Strip in response to a rocket fired earlier from the Palestinian territory, Israel's military said.

There were no immediate reports of injuries.

While several militant groups operate out of the Palestinian enclave, Israel holds Gaza’s Hamas rulers responsible for all rocket fire out of the territory and usually strikes Hamas targets in response.

Reports suggest the Israeli forces hit targets in the Gaza City as well as the southern Gaza cities of Rafah and Khan Younis where plumbs of smoke and flames were seen, according to witnesses.

Late on Saturday, Palestinian militants in Gaza fired a rocket toward Israel, setting off air-raid sirens in the southern Israeli city of Ashkelon, the Israeli military said.

Israeli police said the rocket caused damage to a structure in the Ashkelon area, roughly 10 kilometres (6 miles) north of Gaza, but there were no injuries. Israeli media said the rocket struck a factory, causing damage.

As yet, none of the militant groups active in the Palestinian enclave have claimed responsibility for firing the rocket.

On 15 November, the Israeli army also struck Hamas positions in the Gaza Strip in retaliation for another incidence of rocket fire into Israel. Similarly, no group has yet claimed responsibility.

The Gaza Strip, where some two million Palestinians live, has been under Israeli blockade for more than a decade.

Israel and Hamas, an Islamic militant group that seeks Israel’s destruction, are bitter enemies who have fought three wars and numerous skirmishes since Hamas seized power in Gaza in 2007.

The two camps reached an agreement at the beginning of September - thanks to mediation by Qatar - to cease hostilities and reinstate a fragile truce in force for about a year and a half which had been agreed through the mediation of the UN and Egypt.