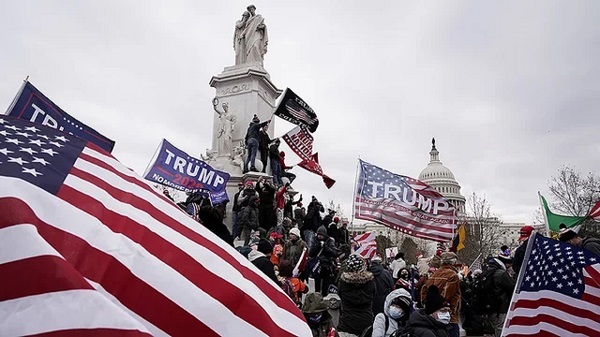 Approximately 4 in 5 Americans said they believe the United States is falling apart, according to a new Axios-Ipsos poll released one week after the deadly pro-Trump riot at the U.S. Capitol.

The poll, which included interviews with more than 1,000 adults from Monday to Wednesday, found that most respondents either strongly or somewhat agreed with the statement “America is falling apart.”

At the same time, a similar proportion of those surveyed indicated that they are “proud to be an American.”

The poll, which reported a margin of error of about 4.6 percentage points, was released the same day the House voted along bipartisan lines to impeach President Trump for his role in the Capitol riot, making him the first president in U.S. history to be impeached twice.

The Axios-Ipsos poll found that support among Americans for removing Trump from office with just days left in his term increased by 5 percentage points from just after the riot last week.

The survey released Wednesday found that 56 percent of Americans agree that Trump should be immediately removed from office, up from 51 percent who said the same last week.

While there is overwhelming support for Trump’s removal among liberals and moderate Democrats, with each at 92 percent, 94 percent of those who identified as the president's supporters disagreed, and 66 percent of “traditional Republicans” surveyed also opposed the move.

Among Trump supporters, 91 percent back the president’s continued challenge of election results, which initially served as the basis for a “Stop the Steal” rally ahead of the violent Capitol riot. Trump at the rally encouraged a crowd of supporters to march to Congress to vocalize their opposition to the certification of President-elect Joe Biden’s win, with the president repeating his unproven claims of a “stolen” election.

Share to
Related News
Only 26 of 249 Republicans in US Congress acknowledge Trump lost: Poll
Biden on beating Trump: 'I feel like I've done something good for the country'
Trump Says DoJ, FBI Employees May Have Been Involved in Large-scale Voter Fraud
Most Republican voters to pick Trump in 2024: Poll
Tags
US ، Poll ، donald trump
Your Comment