Tuesday, 17 November 2020_The top Iranian and British diplomats have exchanged views on bilateral cooperation within the framework of the 2015 nuclear agreement between Tehran and world powers. 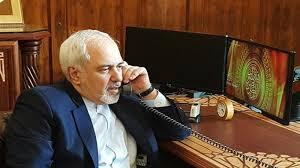 The nuclear deal, named the Joint Comprehensive Plan of Action (JCPOA), was reached on July 14, 2015 between Iran and a group of countries then known as the P5+1 — which included the United States, Britain, France, Russia, China, and Germany.

In May 2018, US President Donald Trump unilaterally pulled his country out of the JCPOA and re-instated the anti-Iran sanctions that had been lifted under the accord. He also imposed secondary sanctions on third parties that sought to do business with Iran, effectively targeting the European parties to the agreement.

Verified by the International Atomic Energy Agency (IAEA), Iran remained fully compliant with the JCPOA for an entire year, waiting for the co-signatories to honor their commitments and offset the impacts of the US withdrawal.

But, as the European parties continued to renege on their obligations, the Islamic Republic moved to scale down its commitment to the JCPOA in a gradual format and based on the provisions of the accord itself that addressed a party’s legal rights in case of non-performance by other sides.