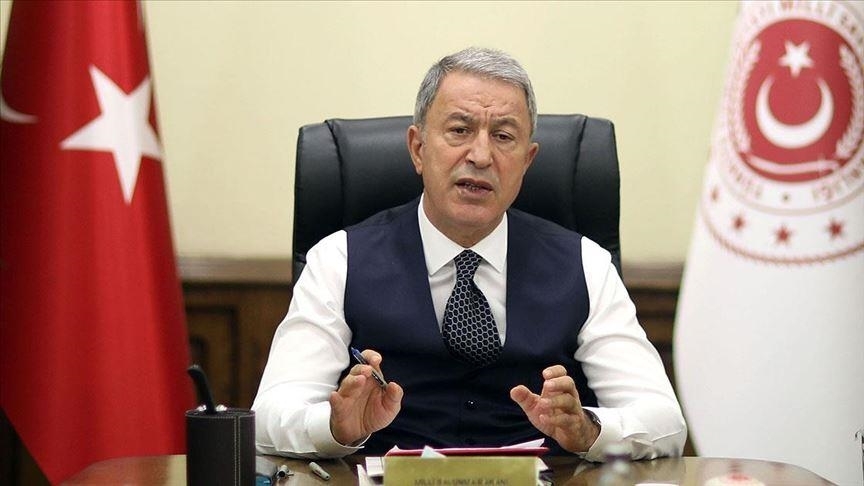 The Turkish defense minister on Thursday slammed a so-called resolution in the French Senate urging the recognition of Nagorno-Karabakh as "a republic".

Speaking to Anadolu Agency, Hulusi Akar said: "[The decision] once again showed that France is part of the problem not the solution in the Karabakh issue."

Relations between the former Soviet republics of Azerbaijan and Armenia have been tense since 1991 when the Armenian military occupied Nagorno-Karabakh, also known as Upper Karabakh, a territory recognized as part of Azerbaijan, and seven adjacent regions.

On the illegal search of a Turkish-flagged commercial ship by an EU operation to enforce a Libya arms embargo, Akar said the responsible parties are trying to "blame each other as they are aware it was illegal."

Akar also commented on a recently signed contract between the Afghan government and UAE-based consortium on handling ground services at Hamid Karzai International Airport in Kabul.

Turkish minister expressed "respect to Afghanistan as a sovereign state" but stressed that "it should be reviewed on legal and operational terms."

Share to
Related News
Putin 'Spent Many Days with Phone in Hand' to End Bloodshed in Karabakh
Russian Peacekeepers Urge Armenia, Azerbaijan to Uphold Karabakh Ceasefire After Violation Claims
Over Recent Ceasefire: Hundreds protest against Armenian PM
Putin: Russia is a mediator in the agreement on Nagorno-Karabakh
Russian Defence Minister arrive to the Republic of Azerbaijan with a working visit
Azerbaijan agrees to give Armenian forces more time to leave
Russian military helicopter shot down over Armenia
Tags
Turkey ، nagorno-karabakh ، France
Your Comment